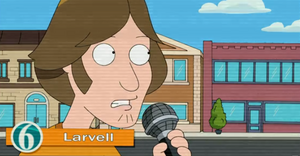 Larvell is a field reporter working for channel 6 news.

In "Fat and Wet", he reports on the ballot initiative by Cleveland Jr. and Kendra to make fat jokes illegal. He interviews Cleveland and Lester after they vote no because they were humiliated that Jr. and Kendra were becoming known as the leaders of fat resistance.

In "The Hurricane", he gives the warning about Hurricane Flowzell's approach, describing its path through all three of Seth MacFarlane's shows.

In "Die Semi-Hard", he interviews the Brown's housekeeper Consuela after Donna is taken hostage.

He is in charge of registrations for the floats for the Stoolbend Thanksgving Parade in "Turkey Pot Die".

He is part of the German segment in "Wide World of Cleveland Show".

Larvell presents the news story of the murder of Mrs. Waterman in "Who Done Did It?".

Larvell is voiced by Mike Henry.

Retrieved from "https://cleveland.fandom.com/wiki/Larvell?oldid=27475"
Community content is available under CC-BY-SA unless otherwise noted.