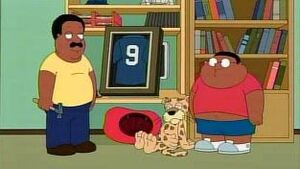 Larry the Leopard is Cleveland Jr.'s stuffed toy. Apparently sharing traits with Hobbes from the comic strip Calvin and Hobbes, Junior seems to be able to interact with him. When Cleveland gives Jr. his baseball jersey in "Field of Streams" and Jr. shatters the glass opening the case, Cleveland Jr. yells for Larry the Leopard to go for help. Cleveland sees Larry's tail disappear around the corner. However, this did not affect Cleveland's view of the doll; he can not stand the way that Junior interacts with it, and was ecstatic during the brief period that Junior decided to throw it out in "It's the Great Pancake, Junior Brown". But when Cleveland saw how upset his son was with his new lifestyle choice, he retrieved Larry from the trash and returned it to Junior.

In "Skip Day", Cleveland uses Larry to provoke Jr. into standing up to him resulting in Jr. knocking Cleveland into a display shelf.

A photo of Larry and Jr. on a roller coaster appears in Jr.'s locker at Stoolbend High School beginning in "There Goes El Neighborhood".

Junior keeps a camera in a teddy bear because he doesn't trust Larry's nanny. "Frapp Attack!" reveals the nanny mistreats Larry and then fools around with her boyfriend.

In "B.M.O.C.", after Donna washes Larry, Jr. is unable to sleep with him, relying on Rallo instead. Desperate to get away, Rallo removes one of Larry's eyes and passes him off as Larry Jr. which pacifies Cleveland Jr. Larry returns to normal in "Jesus Walks".

After Junior tears Larry's head off when he becomes disillusioned in "Squirt's Honor", Larry later drags his head back into place and threatens to kill him. The voice of Larry was provided by Kevin Michael Richardson here.