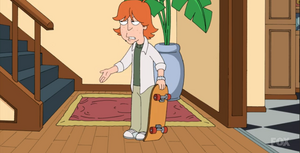 Larry is the accident-prone step-son of NFL star Barry Shadwell. In "Ship'rect", Cleveland tries to get closer to Barry with the idea of hooking up Roberta with Larry. Roberta's only interest is using Barry's connections to land a television contract. When she brings her television demo tape over, Barry suggests that Roberta and Larry go watch it in the privacy of the bedroom, a suggestion that Larry is interested in but Roberta is not. When Donna finds out that Cleveland tried to use Roberta, she forbids Cleveland from continuing a dinner date he'd had planned with Larry, Roberta and Barry. Arriving without Roberta, he tells Larry that she was murdered and couldn't attend dinner, resulting in Larry's departure and Barry and Cleveland continuing their dinner together.

Larry is voiced by Jason Sudeikis.

Retrieved from "https://cleveland.fandom.com/wiki/Larry?oldid=30088"
Community content is available under CC-BY-SA unless otherwise noted.