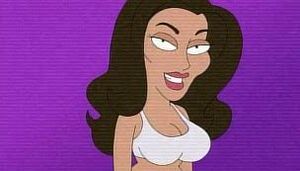 Kimberly Noel "Kim" Kardashian (born October 21, 1980) is an Armenian-American celebutante, socialite, model, actress, and television personality. She is known for her social life and her role on the E! reality show Keeping Up with the Kardashians and Kourtney and Kim Take New York.

Kim appears in "The Brown Knight" selling her own brand of $300 jeans with zippers in the front and rear which Roberta wants.

Cleveland points out that Kim Kardashian didn't go to college in "B.M.O.C.".

Cleveland is hustled by Robert Tubbs into running to Canada to pick up four hundred geese after Kim is seen in a goose coat at the Fat Armenian Awards in "Hustle 'N' Bros.".

Kim is voiced by Kit Pongetti.

Retrieved from "https://cleveland.fandom.com/wiki/Kim_Kardashian?oldid=29982"
Community content is available under CC-BY-SA unless otherwise noted.