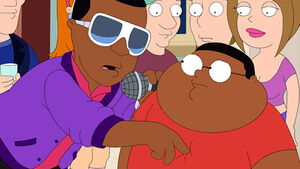 Kenny West is an arch rival to Cleveland Brown Jr.. He is a nineteen-year old teenager who attends Stoolbend High School and is voiced by Kanye West.

Kenny West is the on again-off again boyfriend of a girl that Cleveland Jr. likes, named Chanel Williams. Kenny makes fun of Junior at first, but after they have a Rap Battle at Federline Jones' house in "Brotherly Love", he decides that they make a good team together. When Cleveland Jr. learned that Kenny and Chanel have a daughter, named Candice, he believed that Kenny was just a deadbeat dad, but once he learns that he takes care of his child, Cleveland Jr. decides that they should be together.

In "Harder, Better, Faster, Browner", Kenny is revealed to be in huge financial trouble, being forced to live out of his car with his daughter. Determined to make something of his life, Cleveland takes Kenny in and lets him live in his garage. He gets him a job at Waterman Cable and later helps him write a number-one rap, "Be-Cleve In Yourself". However, he soon fires Cleveland as his manager, realizing how inexperienced he is in the rap world.

Kenny and his friends all wear the same style of sunglasses. The shades that Kenny wears cover up one of his eyes, which involuntary moves up and down. However, in his next appearance, both of his eyes are normal.

Kenny has a cameo on the golf course in "March Dadness".

Members of a Rap Illuminati ask Cleveland to help destroy Kenny's career in "Menace II Secret Society" when he becomes too pushy even for them. Cleveland gets Kenny to incorporate polka music into his show where it becomes a hit.