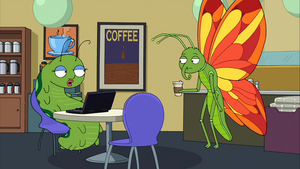 Rick is a butterfly that runs into his ex-girlfriend Karen in a pair of cutaway gags set up by Cleveland Brown in "The Way the Cookie Crumbles".

When he is at first happy that his father has apparently slipped up, he his expression of joy leads to Rick bragging about he has transformed from a caterpillar to a butterfly. But when Cleveland realizes that his mother is also hurt by this he feels sad, leading to Rick crying outside of the store after bumping into Karen. Later, Cleveland starts to launch into a third cutaway but is cut off by Donna.

Retrieved from "https://cleveland.fandom.com/wiki/Karen_%26_Rick?oldid=28965"
Community content is available under CC-BY-SA unless otherwise noted.