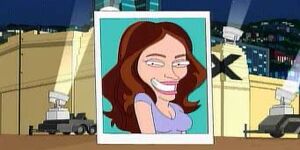 Julia Fiona Roberts (born October 28, 1967) is an American actress. She became a Hollywood star after headlining the 1990 romantic comedy Pretty Woman, which grossed $464 million worldwide. After receiving Academy Award nominations for Steel Magnolias in 1990 and Pretty Woman in 1991, she won the Academy Award for Best Actress in 2001 for her performance in Erin Brockovich.

Julia Roberts "guest stars" as Julia Robertson, Robert Tubbs' parole officer in Cleveland Live! where she is hit in the head by a studio light and killed on the show when a drunken Roberta slams a door.

Julia was voiced by Kit Pongetti.

Retrieved from "https://cleveland.fandom.com/wiki/Julia_Roberts?oldid=30639"
Community content is available under CC-BY-SA unless otherwise noted.