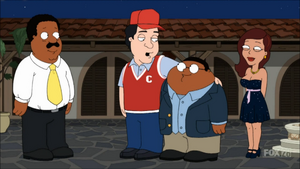 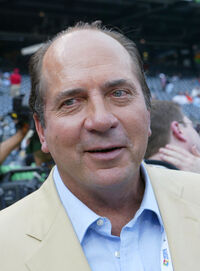 Johnny Lee Bench (born December 7, 1947 in Oklahoma City, Oklahoma) is a former professional baseball catcher who played in the Major Leagues for the Cincinnati Reds from 1967 to 1983 and is a member of the National Baseball Hall of Fame. Bench, a 14-time All-Star selection and a two-time National League Most Valuable Player, was the best offensive and defensive catcher of the 1970s, and was a key member of The Big Red Machine, which won six division titles, four National League pennants, and two World Series championships

Johnny Bench appears as himself in "Y Tu Junior Tambien" when Cleveland Brown and Donna treat Cleveland Brown Jr. and his girlfriend Cecilia out. Johnny not only picks up the tab for dinner, but notes that Cecilia is hotter than Donna to Cleveland's annoyance.

Johnny also voices himself on a Stoolbend radio show in "The Men in Me".

Retrieved from "https://cleveland.fandom.com/wiki/Johnny_Bench?oldid=21952"
Community content is available under CC-BY-SA unless otherwise noted.