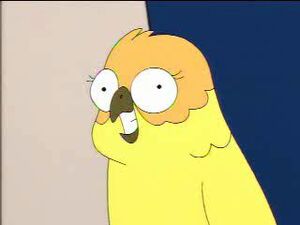 Joan Parakeet is a parakeet bought by Robert for Donna at Woolworth's in the "Pilot". Rallo names her Joan after Donna tells him the bird is female. However, at the end of the episode, Joan leaves with Robert and says "That's what I was tellin' you before!" with a distinctly male voice.

Retrieved from "https://cleveland.fandom.com/wiki/Joan_Parakeet?oldid=30284"
Community content is available under CC-BY-SA unless otherwise noted.