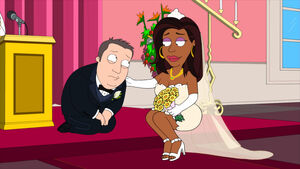 Janet is Donna's sister, voiced by Niecy Nash. She had hooked up with a pastor and mothered two sons, Brian & DeBrian, who are very energetic. She works as the lottery number announcer.

In "Another Bad Thanksgiving", after a night of sex with Holt, they run off to Las Vegas to get married. When Donna finds out she has left them with her boys, Donna insists they go to Vegas where she confronts Janet and tells her that Holt's feelings are real and not to be thrown away on one of her whims. During their vows, she realizes exactly what Donna had been trying to tell her and calls off the wedding, telling Holt she'll still come around for sex once in awhile. This may imply that they are still together, in a long distance relationship.

She also appeared in the "The Essence of Cleveland", in a flashback with Cleveland and Robert.

Retrieved from "https://cleveland.fandom.com/wiki/Janet?oldid=32436"
Community content is available under CC-BY-SA unless otherwise noted.