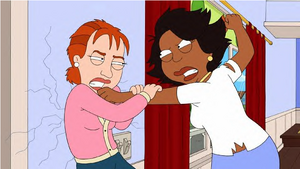 Jane is a red-head who works with Cleveland at Waterman Cable. She loves cats and is apparently quite wild. When Holt tells Cleveland about his girl troubles in "Buried Pleasure", he introduces him to Jane. However, she turns out to be very abusive, often injuring Holt and beating up Cleveland, Donna, and their friends.

She is apparently Jewish, as she uses "J-date", and is also a "leap-year Virgo".

Also, despite the fact she was mean to them, she was invited to Cookie's and LeVar's wedding in "You're the Best Man, Cleveland Brown". She is also seen dancing next to Holt as he dances with Kimi.

Jane is voiced by Stacy Ferguson.

Retrieved from "https://cleveland.fandom.com/wiki/Jane?oldid=31057"
Community content is available under CC-BY-SA unless otherwise noted.