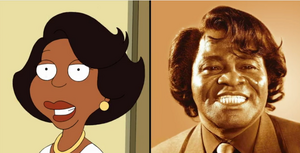 James Joseph Brown (May 3, 1933 – December 25, 2006) was an American singer and songwriter. Eventually referred to as "The Godfather of Soul", Brown started singing in gospel groups and worked his way on up. He has been recognized as one of the most iconic figures in the 20th century popular music and was renowned for his vocals and feverish dancing.

When Donna refuses to let Rallo return to Vinnie's Barber Shop after taking over Rallo's plan to bring the guys into the house by using Cleveland Jr. as a hair stylist in "To Live and Die in VA", Rallo reminds Donna that he controls Cleveland Jr. and if he doesn't get to go back he will have Jr. return her old hair style back. Donna agrees to let Rallo return to the barber shop after her old hair style is compared to that of James Brown.

Retrieved from "https://cleveland.fandom.com/wiki/James_Brown?oldid=15292"
Community content is available under CC-BY-SA unless otherwise noted.