In June 2009, an advance copy of the "Pilot" episode of The Cleveland Show was leaked to the internet by unknown sources. However, it contained many differences from the broadcast version: 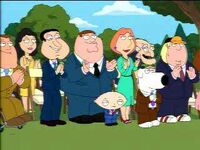 Also of note, during the theme song in the leaked version, the screen changed from its 4:3 aspect ratio to 16:9 widescreen. In the broadcast version in some markets, the screen was kept cropped down to 4:3 the entire episode. Producer Kara Vallow reported this was a decision made by some cable television providers and not an episode change.

Some of the language changes such as "touch nipples" were altered for broadcast television and returned in the uncensored version of the episode.