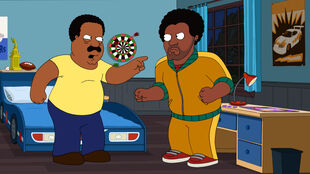 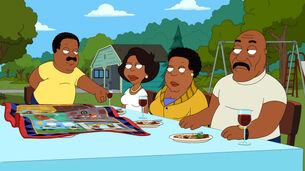 While Cleveland prepares for his father's sixty-third birthday party, Robert shows up for his alimony and Cleveland reluctantly invites him to the party. Robert shows up Cleveland's quilt gift with tickets to a Las Vegas prize fight for LeVar and when the return, LeVar reveals that he adopted Robert so he could have a son to be proud of. Cleveland shows up at their house and finds Robert there. After a late poker game, Levar reveals that he gave Robert Cleveland's old room and they fight until sent to bed. They decide to break into the liquor cabinet and bond, with Cleveland wanting to know how to hustle like Robert does. Robert outfits him in a track suit and sends to to run crummy jobs while Cleveland is unaware that he is being hustled. 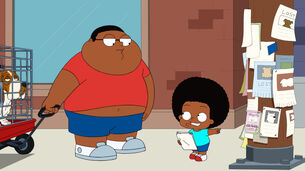 Meanwhile, while Junior and Rallo play, they break Donna's recorder before a gig at a car dealership. She demands they get jobs to earn the money for a replacement. While trying to figure out what to do, they spot flyers offering rewards for lost dogs and decide to become dog bounty hunters. They don't have luck at first, but find a poster for a reward from Mr. Waterman's dog offering $5000. They locate the dog, but Rallo becomes attached to the pooch. When Donna threatens Junior's stuffed Larry the Leopard doll, he takes the dog back and Rallo follows, still upset that they have to return the dog. But when they arrive at Mr. Waterman's house, they find that Mr. Waterman really hates the dog and keeps trying to get rid of it and it's his wife that keeps offering the reward to bring it back. When they think they are about to get stiffed, Rallo hits on the idea of getting the reward money in order to keep the dog. As the dog barks, Mr. Waterman grumbles about the blackmail, but pays up and they are able to replace Dona's recorder just before she uses a saw on Larry.

When Cleveland finally figures out he is being hustled, he discovers it's because Roberts is jealous of everything Cleveland ever had while Robert had nothing. Freight Train gets angry at Robert for pulling a hustle on another family member and spanks him while Dona plays her recorder and Cleveland gets a laugh.