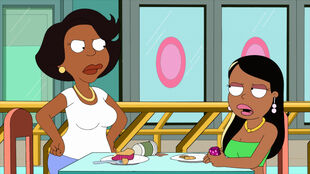 How Do You Solve a Problem Like Roberta?
After Cleveland criticizes her parenting skills, Donna lets him deal with Roberta by himself. 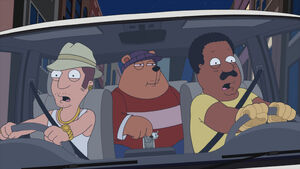 At a school carnival, Cleveland wins a weekend at a spa and Rallo wishes himself to be invisible which he believes in as he pulls pranks in the nude. When Roberta and Donna grow apart, Donna reaches her wits end. After Cleveland criticizes her parenting skills, Donna lets him deal with Roberta by himself and takes off for a weekend at a spa that Cleveland won with Kendra. Cleveland tries to get on Roberta's good side by letting her spend time with Federline only to find out she broke up and is dating an older boy, Diego. When Cleveland forbids her from going out with Diego, he tries to make up for it by hosting a party at their house instead. When Cleveland's party is a bust, he heads off to bed leaving Roberta to invite a house full of rowdy parties while she uses the cover to sneak off with Diego. Finding Federline crying in the bushes from their breakup, they find the only car they can use to pursue is Raymond's old driver's education car which has a stoned Raymond in the backseat. 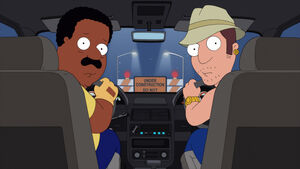 Meanwhile, Diego's driving scares Roberta who wants out but Diego refuses until after the race which Roberta finds herself in. Directed by Raymond, Cleveland manages to intercept Diego and ejects Raymond who wrecks Diego's car. Recovering Roberta from the wreck, Cleveland gives credit for driving to Federline letting Roberta make up with him. Rushing home, they clean up the mess from the party before Donna comes home. When Roberta shows a changed attitude towards Donna, Donna becomes depressed until Cleveland tells her of the events of the weekend. Cleveland suggests that Roberta is a lost cause and they should concentrate on Cleveland Jr. who chooses that moment to walk past naked believing himself to be invisible thanks to Rallo.

Previous Episode /// How Do You Solve a Problem Like Roberta? \\\ Next Episode

Retrieved from "https://cleveland.fandom.com/wiki/How_Do_You_Solve_a_Problem_Like_Roberta%3F?oldid=33195"
Community content is available under CC-BY-SA unless otherwise noted.