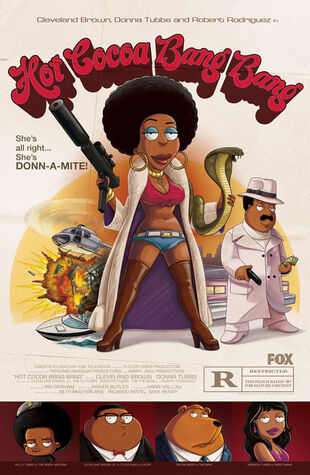 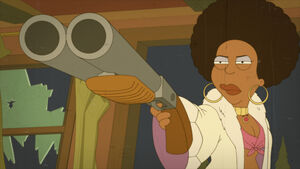 Over breakfast Cleveland shows off his dream comic book "Waderman" inspired by an incident when he was younger when Donna fell into a fountain. Cleveland proposes to take the entire family to Comic-Con in an attempt to sell his comic book, “Waderman”. Despite Donna's initial reservations, Cleveland manages to convince her to let them go. While there, Donna is horrified to find out that Robert Rodriguez is screening a Blaxploitation film that she starred in when she was younger. After paying for Rallo's silence, Donna stalks off to cancel the screening. Trying to drum up attention for his comic book, Cleveland hires Rallo to be his sidekick "Squirt" although just as they start to attract some attention, the conventioneers are drawn off by a display from FOX.

When Donna locates Rodriguez she demands that he call off the screening. Despite his initial refusal, Rodriguez agrees. However, he offers to make "Waderman" into a movie for Cleveland and uses the leverage to persuade Donna into appearing at the screening where he promises her it will be the only time the film is shown. After being tricked into going to the beach to see how long "Waderman" could hold up in water, Cleveland returns to the screening where he finds Donna's character engaged in a sex scene. After getting over his shock, Donna explains to Cleveland that Rodriguez promised that that would be the only screening. However, Rodriguez tells Donna that the film was such a hit that he made a deal with Warner Brothers to distribute it and takes off with the film, telling Cleveland that he only used him to get Donna to appear at the screening. 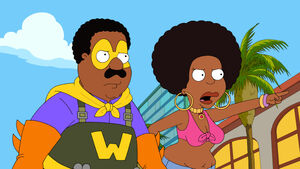 Donna attempts to wrestle the film away but fails and Rodriguez' henchmen Cheech Marin and Danny Trejo lock Cleveland and Donna out of the con. As Donna apologizes, explaining that she was just trying to help Cleveland with his comic, Cleveland comforts her on her appearance. Deciding to try again to get the film, the change into Waderman and Cocoa Bang Bang. After taking out the guards at the door, they catch Rodriguez just as he's leaving. Rodriguez jumps into a pedicab and orders the driver to take him to the Amtrak station and Donna and Cleveland follow in a second. Arriving at the train station, they catch up with Rodriguez although Donna nearly slips in a fountain but she is rescued by Cleveland who tosses her onto Rodriguez. As Cleveland takes Rodriguez' guitar case containing the film, Rodriguez pulls out a pair of guns. Cleveland presses a button on the handle of the case that launches a rocket that hits a passing tanker truck by Rodriguez as it explodes and Cleveland and Donna walk off into the sunset with their clothes singed and burned.

Meanwhile, after getting bumped aside for some Hollywood people for a panel, Cleveland Jr. gathers a band of geeks together to take the Con back to its true origins. They overrun and destroy the Hollywood people.