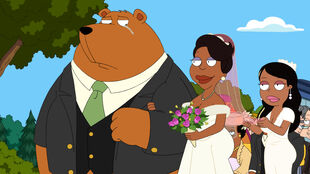 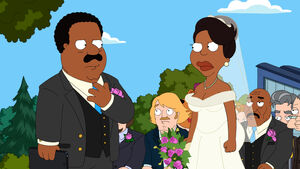 After watching an Oprah Valentine's special, Donna gets the idea to renew and recite their own wedding vows. Following the guys advice, Cleveland infuriates her by writing his true feelings instead of something romantic. Refusing his apology, Donna drags Cleveland to marriage counseling. But after the counselor appears to side with Donna he makes it clear that Cleveland can swing the "treatments" in his favor for extra money. Cleveland quickly writes a check and the counselor asks Donna to bend to Cleveland's wishes for a while. Cleveland proceeds to abuse his position with Donna until the doctor demands Cleveland sleeps with his wife and threatens blackmail if Cleveland doesn't give in. Telling the guys, they advise him to give in. At the doctor's house, the wife is enthusiastic but Cleveland resists and admits he loves Donna only to find it was a set up to get him to really admit his love. 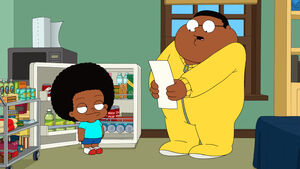 Meanwhile, Junior's beloved refrigerator, "Perry," dies and Rallo helps him hold a funeral. But Junior later finds it in Rallo's room and Rallo tells him it was just the outlet that went bad. Junior demands his property but Rallo points out that it that it is now legally his and appeals to Junior's sense of justice. Later, Rallo goes further and sets it up as a hotel-style mini-bar in Junior's room and intends to charge Junior for using it. Junior tries to resist by buying his own snacks but finds the trip is more difficult that he imagined. Junior gives in and soon finds he owes over $1300. Rallo suggests he quit eating but the food seems to find Junior no matter what. Junior finds a loophole that the food isn't for resale and threatens Rallo with a crime without returning the fridge to his control and placing a fake part in his hair like Arnold Drummand.

Cleveland closes the episode by noting that there is nothing funny about marriage counseling in that it costs a lot of money and they always side with the wife as he wishes the audience a happy Valentine's Day.

Retrieved from "https://cleveland.fandom.com/wiki/Here_Comes_the_Bribe?oldid=32636"
Community content is available under CC-BY-SA unless otherwise noted.