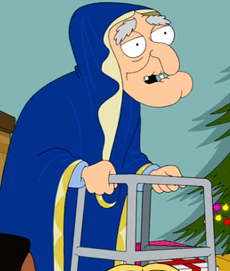 John Herbert is an elderly pedohebephile[1] who lives on Spooner Street in Quahog with his old, crippled dog, Jesse. He has a high-pitched, very soft, effeminate voice and with a slight whistle lisp. He is often seen wearing a light blue robe and slippers and uses a zimmer-frame walker to get around. He is a retired United States Army veteran.

When Cleveland talks about how much better Lloyd Waterman's Christmas party is than Herbert's in "A Cleveland Brown Christmas", a scene is shown with Herbert singing Silent Night to Cleveland and some children.

In "It's the Great Pancake, Junior Brown", Cleveland Jr. recalls trick-or-treating at Herbert's house and Herbert living in a suitcase in his room in "Murray Christmas".

Herbert comments on "I'm Paying a Young Boy for Sex" in "A General Thanksgiving Episode".

Retrieved from "https://cleveland.fandom.com/wiki/Herbert?oldid=30624"
Community content is available under CC-BY-SA unless otherwise noted.