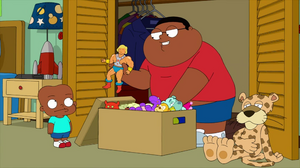 He-Man is the alter-ego of Prince Adam. They are a fictional character in the Masters of the Universe franchise. He-Man and his friends defend Eternia and the secrets of Castle Grayskull from the evil forces of Skeletor.

Cleveland Brown Jr. has a toy of He-Man in his toy chest when he attempts to find a companion for Rallo's imagination in "Of Lice and Men".