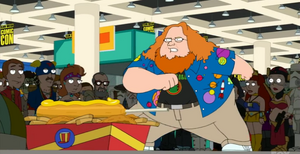 At Comic-con in "Hot Cocoa Bang Bang" Harry faces off with Kevin Smith for a corn dog. When they collide, they merge into a huge cycloptic blob that eats the conventioneers while imploring Zach Galifianakis to join them so they could be unstoppable.

Both Knowles and the resulting creature are voiced by Kevin Michael Richardson.

Retrieved from "https://cleveland.fandom.com/wiki/Harry_Knowles?oldid=16552"
Community content is available under CC-BY-SA unless otherwise noted.