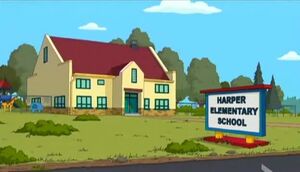 Harper Elementary School is Rallo's elementary school in Stoolbend. His teacher, Mrs. Lowenstein, had kicked him out, but Cleveland later talks her into reinstating him.

According to the DVD commentary for the pilot episode, Harper Elementary is named after co-creator Richard Appel's elementary school in Palo Alto, California.