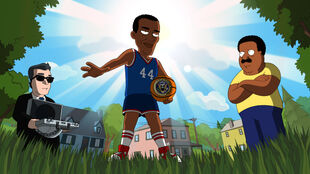 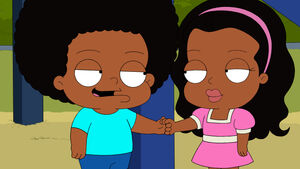 When Cleveland destroys Rallo and his friends during their basketball game, he reminisces about his childhood playing days including beating a kid named Barry Obama whom Donna informs him is now President Obama. Cleveland takes the news hard, wondering what he has done with his life. When he runs into Kenny West dropping his daughter Candice off at Rallo's school, he invites him to drop her off for a play date which Kenny agrees to do that afternoon as he has other business to attend to. When Kenny brings Candice over, Rallo is thrilled to see her. When Cleveland forgets that Kenny will pick Candice up, Candice shows Cleveland where he works; As a server in a rap-themed restaurant. Cleveland also finds out they have been living in Kenny's car and invites them to move into the garage in a gesture intended to show up Barrack Obama. Kenny decides to sell his rap recording equipment and becomes a cable installer like Cleveland. 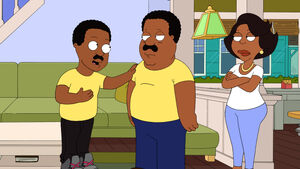 Rallo is thrilled with Candice's attention until she slowly becomes pushy. Kenny emulation of Cleveland reaches the point of growing a mustache and even looking like him when Cleveland loans him a shirt. Donna makes Cleveland see that he has taken Kenny out of his element and Cleveland buys back all of Kenny recording equipment and they write a new song. At first they have no luck in promoting their new song, but when a little girl falls down a well they rush off to perform a benefit concert and their song takes off. When the reach success, Kenny dumps Cleveland. On a date with Candice, Walt and another friend of Candice, Rallo has had enough of Candice's attitude and leaves the girls behind at a restaurant with every other guy in the place. Cleveland tells Donna about being fired by Kenny, but just then President Obama's helicopter lands on the front lawn and Obama challenges Cleveland to a game of basketball which he wins and then departs. Donna tries to jump on board but is kicked off by the secret service.