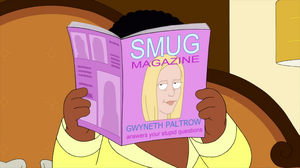 Gwyneth Kate Paltrow Martin (born September 27, 1972) is an American actress, singer, and food writer. Paltrow garnered worldwide recognition through her performance in Shakespeare in Love, for which she won an Academy Award for Best Actress, a Golden Globe Award and two Screen Actors Guild Awards, for Outstanding Lead Actress and as a member of the Outstanding Cast. She also won an Emmy Award for Outstanding Guest Actress in a Comedy Series in 2011 for her role on the Fox TV show Glee.

Retrieved from "https://cleveland.fandom.com/wiki/Gwyneth_Paltrow?oldid=29980"
Community content is available under CC-BY-SA unless otherwise noted.