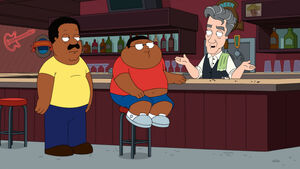 Gus is the bartender/owner of The Broken Stool. He seems to be on good terms with Cleveland and his friends, giving them their drinks for free and calling Cleveland his "favorite patron". He doesn't pay his mortgage on the bar, and learns quite a bit of bartending from the fourteen year old Cleveland Jr.. However, he still has trouble grasping the simplest concepts of running a bar, pouring beers into paper bags when somebody requests for a "beer on the go".

Gus is also very lax, hiring Cleveland Jr. to work at his bar and letting people almost push him around in "The Curious Case of Jr. Working at the Stool", just as Cleveland and the gang gets "free beers" from him. He can get physically intimidating when he wants to be, threatening Cleveland and the guys after they convince him to open The Broken Stool No. 2 in "A General Thanksgiving Episode" and insisting on Donna "making time" for his weirdness in "The Hangover Part Tubbs".

It's hinted that Gus might have a darker side. In "Gone with the Wind" the upstairs room over the bar is filled with skulls, a guillotine and other assorted macabre items. In "Nightmare on Grace Street", it is revealed that Gus secretly uses the meat from human corpses in the sandwiches served at his bar. At the end of the episode, he is even seen giving a wink to the camera as he hauls the body of Donny away in his car, hinting this process is going to continue. In "Who Done Did It?", he designs an exercise video of a stalker chasing a victim. In "Fist and the Furious", he has an impressive assortment of weapons and has booby-trapped toilets. He greets Cleveland and they guys from a mausoleum crypt at the Stoolbend Cemetery in "Grave Danger". Gus has a hearse low rider with ghosts instead of hydraulics in "Crazy Train".

In "Escape From Goochland", Gus claims to being 117 years old.

Cleveland and the guys talk Gus into opening a second version of The Broken Stool at the airport in "A General Thanksgiving Episode", but when they find that the airport is really overrun with bars, Gus threatens them to make the bar work so his niece can get her college fund back. He later backs off of his threats when his niece dies. Gus is also revealed to raise llamas in this episode, was relocated to Stoolbend by the Federal Government and had been raised by his sister Courtney after his father killed his mother and then himself.

While washing his laundry in "'Tis the Cleveland to be Sorry", Gus unzips his entire skin and chats with Roberta, mentioning that he once saw Eric Clapton in the laundromat.

Gus runs an upscale Italian restaurant called Gustavos over The Broken Stool where Donna dines with Ebert Williams in "The Hangover Part Tubbs".

In "California Dreamin'". Gina puts together an elaborate production of stand-ins including Gus to convince the Brown family that Cleveland has returned home from Los Angeles and they should do the same.

Gus also appeared in an episode of Family Guy, "The Splendid Source", where he helped Peter Griffin find the source of all dirty jokes.

Gus is voiced by David Lynch.

Retrieved from "https://cleveland.fandom.com/wiki/Gus?oldid=32433"
Community content is available under CC-BY-SA unless otherwise noted.