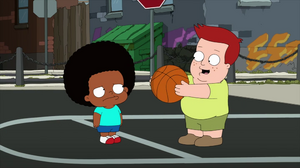 Gunther is a kid from East Stoolbend near Robert Tubbs's apartment.

When Rallo visits Robert and is left alone in "Grave Danger", he decides to go seek some kids to play with. He bumps into Tyler, Randy & Snoot, three bullies who he tries to be nice to, but when he wants to play basketball, they state that they don't have a ball and point him in the direction of Gunther and order his to beat him up and take his ball. Reluctantly, Rallo goes over to the cheerful and open Gunther and explains the situation and Gunther goes through the motions of being beaten and robbed.

Later, after Rallo breaks a stolen iPhone that was planted on him, the bullies show up at his house with pictures of his "crime spree" including his assault on Gunther.