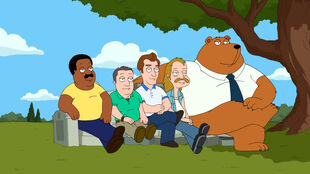 Grave Danger
Cleveland and his friends discover the joys of hanging out at the beautiful Stoolbend Cemetery. 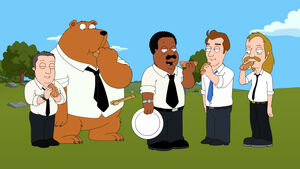 Rallo convinces Cleveland that his time of dying is near. While seeking comfort from the guys, Holt shows that he bought the guys and their families adjoining plots so they could all be together. The guys decide not to let the land wait for their passing and make it a hang out. While enjoying the view, Cleveland and his friends are paid to be mourners at a funeral. The guys soon expand their hang out to attending other funerals for free. Donna confronts Cleveland about his new hobby and believes it is creepy. She uses a cheap gift he gave her of a promise card, forbidding Cleveland from doing something stupid to get him to quit attending funerals. Later, Cleveland tells Donna that he has given up his latest hobby but surprises her with a romantic dinner at their plot over a casket. Cleveland convinces her that he wants her to look at the spot as a reminder of the good times with him. 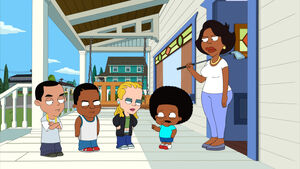 Meanwhile, after insisting that he is a man, Rallo heads to East Stoolbend to stay at Robert's apartment for the weekend. But when Robert abandons him for a trip to Baltimore relying on his insistence of being a man, Rallo soon becomes hungry when left an extra day and strikes out for the store, running into a bunch of the tough local kids. When Rallo tries to make friends, they convince him to rob a kid for his basketball, with both of them putting on a charade. After coming out of church, he runs into the kids who plant a stolen iPhone on him. As they are chased, Rallo breaks the iPhone and the kids chase him until he luckily runs into Robert who takes him home. While bragging to his friends about his tough routine with the kids, they show up at his door and blackmail him with pictures of his “crime spree.” Donna lets slip all of Rallo's expensive goods are upstairs and they plan on robbing him. Cleveland even offers his old treasured Garbage Pail Kid cards for show and tell and the bad kids get the idea to rob the entire show and tell. During the class, Rallo tries to convince them of the futility but they insist Rallo plays his part. Rallo sends the rest of the class off to play hide and seek while they are robbed. After the class breaks out in tears, Rallo reveals that not only did he help, he tricked the kids. But as they return for the goods, the entire class stands behind Rallo and insults the kids, resulting in Rallo to call a limit to insults and offers them some of the kid's belongings, including his big wheel. But as they leave with the donated goods, Rallo calls the police to report the theft, allowing them to get away from the class before getting in trouble and noting that they were dicks.