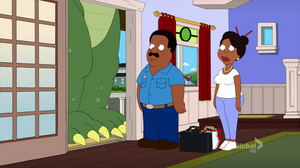 Godzilla is a Kaiju or "giant monster", first appearing in Ishirō Honda's 1954 film Godzilla. Since then, Godzilla has gone on to become a worldwide pop culture icon starring in 28 films produced by Toho Co., Ltd. The monster has appeared in numerous other media incarnations including video games, novels, comic books, and television series.

In the same episode, Godzilla appears on a beer poster in The Bloken Stoor.

Retrieved from "https://cleveland.fandom.com/wiki/Godzilla?oldid=32420"
Community content is available under CC-BY-SA unless otherwise noted.