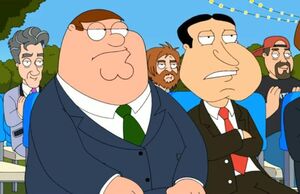 Glenn Quagmire is one of Cleveland's former neighbors and good friends from Quahog. An airline pilot known for his unlimited libido. He appears in the "Pilot" when Cleveland decides to leave Quahog.

He visits Stoolbend briefly in "Gone with the Wind" to give Cleveland some depressing news. He ends up bringing Loretta's casket to Stoolbend and mentioned that Loretta's death was caused when Brian Griffin dug up a full Apatosaurus skeleton and Peter Griffin ended up dropping it on Loretta's house causing her to go through the same bathtub gag Cleveland did in Family Guy, except that she died in the fall. Quagmire then leaves to do a background appearance on American Dad!.

Strangely, even though Quagmire was the first person Cleveland told that he would get a spinoff, and he was there to send Cleveland off, there was a cutaway in "Family Goy" where he thought he was the one getting a spinoff. He seems to still be carrying this grudge, calling Cleveland "Joey" when he visits him.

Although Quagmire has been a close friend of Cleveland's for many years, he was largely responsible for Cleveland divorcing his first wife Loretta after having a brief affair with her. Despite the incident, the two managed to repair their friendship.

Quagmire and Peter Griffin appeared at the end of "You're the Best Man, Cleveland Brown" where Quagmire stated how Cleveland's show made it through its first season and then asked Peter if he could have his own show. Peter replied by simply stating that Quagmire was a rapist.

Quagmire appeared in an imagination of Cleveland thinking if the world would be better off without him, which Quagmire appears and sings his version of The Cleveland Show Theme, with Cleveland replying that the world needs him in "To Live and Die in VA".

Cleveland Jr. would later admit that he lost his belief in God after Loretta's cheating with Quagmire in "The Hurricane".

Quagmire is mentioned in "A General Thanksgiving Episode" when Lester believes Cleveland was a pilot and is corrected by Tim.

Retrieved from "https://cleveland.fandom.com/wiki/Glenn_Quagmire?oldid=33939"
Community content is available under CC-BY-SA unless otherwise noted.