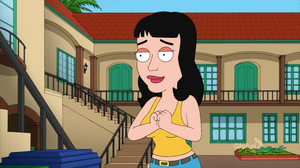 Gina is an aspiring actress Cleveland meets while living at the Hollywood Apartments while working as a baseball scout for the Los Angeles Dodgers in "California Dreamin'".

While the family is having all kinds of success in California, Cleveland finds his dream just isn't happening for him. Cleveland meets their new neighbor Gina and confides that things are not working out the way he expected. Gina takes Cleveland out to a small community called The Grove just like Stoolbend. Seeing his excitement at being somewhere familiar, Gina suggests he should go back home.

Cleveland tries to approach Donna with the idea of returning but explodes since she has found success as "Old McDonna" and refuses to leave. As Gina asks Cleveland how things worked out, the rest of the family shows the effects of being in Los Angeles and she suggests Cleveland do whatever it takes to get them to go back home. They arrive one day to see a message Cleveland sent from Stoolbend, showing their friends and what they are missing, not to mention that Gina came along with him to keep him company. They suddenly find they want to go home just as an earthquake strikes. As the walls split, the family finds they were really fooled by a Hollywood production put together by Gina, although the part of Gina was played by Reese Witherspoon. Cleveland suggests that she should be behind the camera but she insists on being an actor.

Gina is voiced by Krysten Ritter.

Retrieved from "https://cleveland.fandom.com/wiki/Gina?oldid=26972"
Community content is available under CC-BY-SA unless otherwise noted.