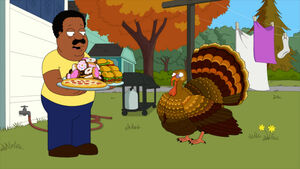 Geraldine was the original name of the Brown's Thanksgiving turkey in "Another Bad Thanksgiving" although Cleveland decides to rename it Luke Wilson after the movie star because he claimed it had grown into a bloated slob who would die before the end of the month.

While Donna's sister Janet goes out on a date with Holt, her kids Brian & DeBrian ride Geraldine through the house. When Cleveland and Donna find out that the couple have eloped, the Brown's took Geraldine/Luke with them to Las Vegas when they attempted to stop Janet from marrying Holt. When the bird appeared on the table at the Thanksgiving feast, Cleveland Jr. was concerned about his dad killing it. Cleveland responded that the bird died on its own of a coke-fueled heart attack at a strip club.

Retrieved from "https://cleveland.fandom.com/wiki/Geraldine?oldid=28694"
Community content is available under CC-BY-SA unless otherwise noted.