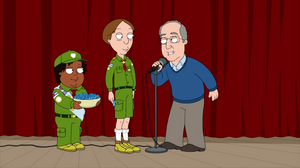 Gene Oshman is a winner in a Freedom Scout raffle of a walk-on role in an episode of The Cleveland Show in "Squirt's Honor". As he happily accepts his prize, he gives a shout out to Cleveland in the audience who give him a mild nod of acceptance.

As Rallo stews after Donna forces him into the scouts junior division, the Squirts, Gene pauses in front of him to say hello to his wife Karen and kids, and Rallo snaps at him to get out of his shot before giving the camera a smile.

Retrieved from "https://cleveland.fandom.com/wiki/Gene_Oshman?oldid=27907"
Community content is available under CC-BY-SA unless otherwise noted.