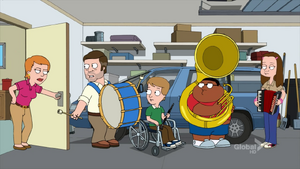 Gary is the middle-aged husband of Carol that tries to pass himself off as a high school student in "Menace II Secret Society". When Cleveland Brown Jr., Gary and other real students are cut from the marching band, they decide to form a polka band instead. Carol complains that their practice is waking the kids while Gary insists that they are the kids. Later, Kenny West identified Gary as his pot dealer and asks Kenny if he needs a pot delivery and he quickly responds with a negative while giving a look to signify an affirmative.

Retrieved from "https://cleveland.fandom.com/wiki/Gary_%26_Carol?oldid=29726"
Community content is available under CC-BY-SA unless otherwise noted.