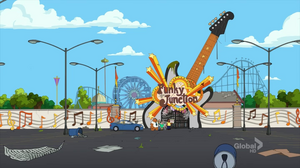 Funky Junction is an amusement park that Cleveland and they guys reminisce about having one of their first adventures at when they believe that their friendship is doomed in "Pins, Spins and Fins!". But they find the park has been closed and condemned. As they guys try to convince Cleveland that their days together are over, Tim rips the gate off the park and they gain access. Cleveland finds the power switch and they have free access to all of the rides. Riding the rotor, Lester starts the ride and after seeing the others having fun, jumps in as well, leaving no one to stop the ride.

Rallo goes to Sad Woody's Gentlemen's Club to find Cleveland but bumps into his dad Robert instead. After Robert has waitress Fifi set Rallo up online, he finds out through Holt's Facebook feed that Cleveland and the guys went to Funky Junction amusement park and Robert reminds him of all the times he promised to take Rallo to the park but didn't. After getting gas money from Rallo, Robert drops Rallo off at at the park and leaves him there alone, he returns to the club where he is also found by Donna who is also searching for Cleveland. Rallo tries to turn off the ride but the control breaks. Rallo climbs onto a skyride to drop a rope but the ride breaks and leaves him dangling over the ride.

Getting to the park, Donna finds Rallo who explains what happens and admits he isn't good at stuff. Donna tries to shut off the master power and starts a fire, nearly dooming them all until they are saved by the fire department. After getting chewed out for not leaving the rescues to them, Rallo saves the fire fighters from falling letters from the park sign and as the otherwise empty park burns, the Stoolbend Rest Home burns down with many casualties due to the fire department being otherwise occupied.