From Bed to Worse 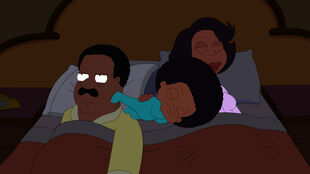 It's a battle between Rallo and Cleveland to be the man of the house.

From Bed to Worse
The battle to be man of the house begins. 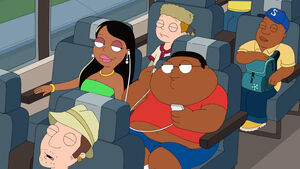 Rallo becomes upset because Cleveland has taken over the house. While telling his friends about his troubles he decides it has to be either him or Cleveland. He plots to come between his mother and Cleveland, temporarily driving Cleveland from the bedroom. When Donna tries to reason with him, Rallo escalates the conflict by breaking his own leg, sending Donna on a one-way guilt trip. Cleveland tries to talk with him and discovers just how far Rallo would go. When Rallo discovers how much his mother misses Cleveland, he agrees to a truce.

Meanwhile, Cleveland Jr. expresses concern about going on a school trip to Washington D.C.. Cleveland bribes Roberta to watch after him. She dumps him immediately after they leave. Chaperones Tim and Arianna have their own problems deciding their lives have fallen into a rut and spend a wild night riding around the town on a scooter. Cleveland Jr. embarrasses Roberta and the kids plan their own night out. When Oliver Wilkerson bring back a beaten-up Federline, Cleveland Jr. become really concerned for Roberta and goes searching for her with Ernie. He finds her in a club where she is being pressured to show her breasts. Cleveland Jr. distracts the photographers by showing his 'moobs' until he reveals he is a boy making them ill so they can escape.

Previous Episode /// From Bed to Worse \\\ Next Episode