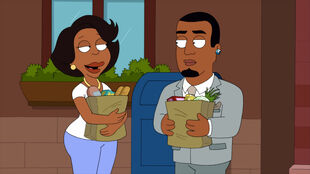 Frapp Attack!
Donna becomes jealous when Cleveland gets too close to a female coworker. 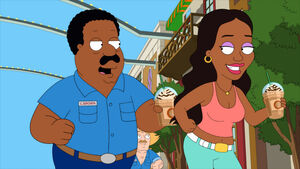 When Cleveland gets too bored with work he meets new fellow worker Tori while Rallo and Junior watch funny internet videos. But when Cleveland starts spending too much time with Tori, Donna becomes jealous. When she catches them getting a little too close and throws Cleveland's frapp drink in his face. Rallo and Junior capture the action and turn it into a music video which goes viral and attracts the attention of big-time music producer Willy Nilly who invites Cleveland to Hollywood while Donna objects to him getting out of her sight. 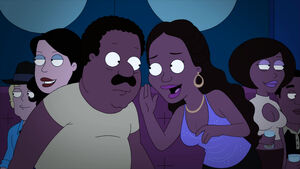 But when Willy Nilly meets with Donna to change her mind about letting Cleveland go to Hollywood he starts flirting with Donna in return and reveals to Cleveland that he's out to take Donna away from him and sends Cleveland off. Cleveland returns and tries to tell Donna of Willy Nilly's plans but she dismisses it as harmless flirting like Cleveland does with Tori. Willy Nilly buys Holt's house to move in next door and experience small-town life. Cleveland tries to hang out with Tori to make Donna jealous back but realizes he can't keep up with her. When he realizes just how bad his life stinks he decides to give Willy Nilly exactly what he wants; Cleveland's life and proceeds to show him exactly what he does for Donna. Willy Nilly becomes horrified and offers to take Donna back to his own life until he gets a look at her without her makeup and returns to Hollywood alone.