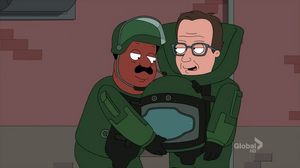 Franklin was the new guy to join Cleveland and his friends on game night outside of The Broken Stool as they decide to play the Hurt Locker game of defusing live c4 explosives in a cardboard box in "The Hangover Part Tubbs".

As Franklin looks forward to many adventures with the guys, the device blows up,scattering body parts all over the alley behind the Stool. At his funeral, Donna uses the opportunity to distance herself from Cleveland and tries to introduce herself as a candidate for the school board to Franklin's family.

Franklin was voiced by Glenn Howerton.

Retrieved from "https://cleveland.fandom.com/wiki/Franklin?oldid=26900"
Community content is available under CC-BY-SA unless otherwise noted.