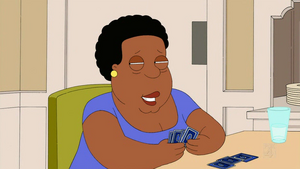 Frances Callier is an American actress and comedian. She is best known for her co-starring role in the British comedy 3 Non-Blondes, as well as being part of the comedy duo "Frangela". She also has a recurring role on the Disney Channel series Hannah Montana as Roxy the bodyguard.

She voices Evelyn Brown on The Cleveland Show.

Retrieved from "https://cleveland.fandom.com/wiki/Frances_Callier?oldid=16598"
Community content is available under CC-BY-SA unless otherwise noted.