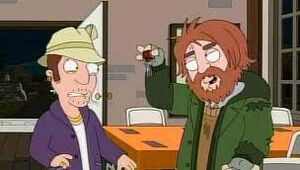 Filthy Nick is a homeless man with a wife, daughter, and son who eats at the Stoolbend Mission. He is one of two men who steal Federline Jones' car in "A Brown Thanksgiving", but gives it back without fighting. He also teaches him and Roberta that family is the most important thing before transporting them back home. While his wife complains that they shouldn't have to live on pocket change when he has this power, he states that he must only use it for good.

He attends the Thanksgiving dinner at the mission upset by Cleveland and Cleveland Brown Jr. during their protests of the killing of turkeys in "Turkey Pot Die".

Nick also appears at the wedding in "You're the Best Man, Cleveland Brown" and at the shelter in "'Tis the Cleveland to be Sorry".

Retrieved from "https://cleveland.fandom.com/wiki/Filthy_Nick?oldid=29758"
Community content is available under CC-BY-SA unless otherwise noted.