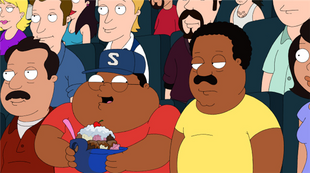 Field of Streams
Cleveland steps up to the plate. 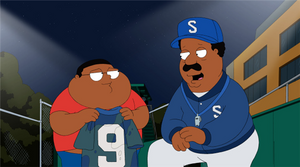 After a nostalgic flashback to the glory days as his high school’s baseball all-star, Cleveland visits his alma mater to find out there’s no longer a team because he and his friends insulted Wally as a teen. Now Principal Wally gives Cleveland one week to raise money to re-build the stadium before the season begins. They raise the cash from a generous donation by Mr. Waterman and organize the team on time. Cleveland then steps in as head coach and dusts off his retired jersey in an attempt to convince Cleveland Jr. to play ball instead of joining the math club. Cleveland Jr. turns out to have no skills, even going as far as deliberately interfering with a play to save a ladybug. The town turns on him and his father's famous number until Cleveland and Terry decide to steal the jersey back. Principal Wally tries to exact revenge by giving Cleveland Jr. the security tape of the jersey theft, breaking his heart. He gives the jersey to Principal Wally who decides to make a show of burning it at a game as an insult to Cleveland. Cleveland Jr. is horrified and attacks Principal Wally, saving his father's jersey.

Retrieved from "https://cleveland.fandom.com/wiki/Field_of_Streams?oldid=32816"
Community content is available under CC-BY-SA unless otherwise noted.