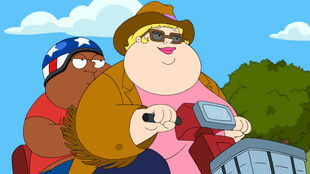 Fat and Wet
Cleveland Jr. and Kendra feel left out of the fun when the family spends an afternoon in the pool and petition to pass a bill to grant equal rights for those who are overweight. 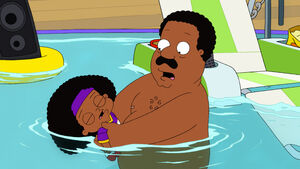 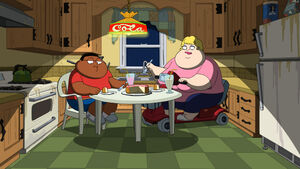 While Cleveland shows off the new pool he bought, Cleveland Jr. and Kendra sit out high and dry rather than be embarrassed wearing swimsuits. When everyone's attention is focused on Roberta, Rallo hits Cleveland with a football but when he tries to recover it from the pool, Donna panics and orders him away. Jr.'s snoring at night keeps everyone awake until Dr. Fist prescribes a mask to help his breathing. Despite Cleveland' misgivings, Jr. wears it at school where he is teased about his weight. While drowning his sorrows over a pizza, he is joined by Kendra and they decides to push to make fat jokes illegal.

While Donna goes out, she asks Cleveland to keep an eye on Rallo and keep him away from the pool. Rallo promptly falls in and nearly drowns, until Cleveland pulls him out. A grateful Rallo wants to tell Donna about Cleveland being a hero but Cleveland wants to keep it a secret and manages to convince Rallo not to tell Donna. However, Rallo quickly realizes Cleveland's intent and starts blackmailing him.

When Cleveland and Lester become laughingstocks because of Jr. and Kendra's push for a ballot measure, they follow Gus' advice to get drunk and are filmed deriding the measure after voting against it, hurting Kendra and Jr. feelings. Deciding it wasn't just their families but the entire town that was against them, they head off the the promised fat land of Wisconsin. Meanwhile, Rallo pushes Cleveland too far and he starts dunking him in the pool until he agrees to stop the blackmail.

Reaching Wisconsin, Jr. and Kendra engorge themselves until they can't take anymore. At that moment Cleveland and Lester arrive to take them home, Lester reminding Kendra that he is the best she can get. When Cleveland points out that being fat is a choice to Jr., Jr. points out that Cleveland is fat too.