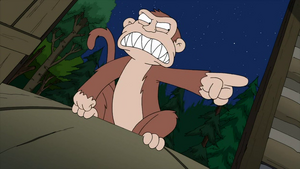 The "Evil" Monkey was a resident of the Griffin household on Family Guy who lived in Chris Griffin's bedroom closet. He regularly tormented Chris, which had become a running-gag in the series until he moved into the son of newsman Tom Tucker, Jake Tucker's bedroom.

In "BFFs", Peter Griffin brings the formerly evil monkey along to rescue Cleveland and his friends from being raped by hillbillies.

Retrieved from "https://cleveland.fandom.com/wiki/Evil_Monkey?oldid=33333"
Community content is available under CC-BY-SA unless otherwise noted.