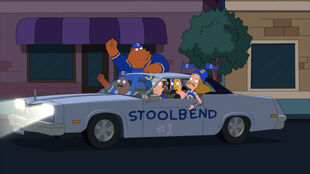 A night out at the big rivalry game.

Escape From Goochland
Donna forbids the older kids to buy costumes for Halloween. 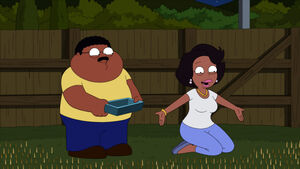 After Donna forbids the older kids to buy costumes for Halloween, Roberta tells Federline who thinks he can get on Cleveland's good side. When Cleveland finds out that it's his turn to be the designated driver when he and the gang visit their rival high school in Goochland for the annual football game, he sets out to find an alternate driver and Federline signs up. When Donna sets out to return Roberta's slutty costume, Cleveland admits he finds it sexy and they set up a rendezvous at a motel after the game. To get even with her mother, Roberta plots to play a prank disguised as her mother and enlists Cleveland Jr. to come along dressed as his dad.

At the game, the guys get riled by Cleveland's rival Chet Butler. During halftime, Goochland puts on a halftime show presenting Stoolbend in a negative light and the wooden wife of President Harrison said to be given to the town. After the game, Federline accidentally backs the guys' car into another that belongs to Chet Butler, forcing the guys to flee for their lives, blending in by donning Halloween costumes until Federline nearly gives away the game.

Donna meanwhile gets arrested for prostitution while spending time in a bar waiting for Cleveland and Roberta and Jr. nearly get caught by Principal Wally when they plant thousands of toothpicks in the school field. 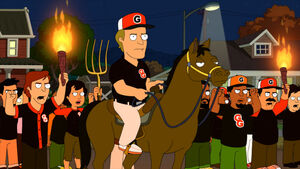 As the guys find safety in the woods, Cleveland berates Federline for his attitude, pointing out he isn't the gangster he thinks he is. Federline takes off. After the guys hop a train to Stoolbend, Federline catches up, having stolen the wooden statue of Eunice. Hot on his heels is a mob from Goochland which proceeds to tear apart Stoolbend. Taking shelter at The Broken Stool, Cleveland decides to use Stoolbend's deficiencies to their advantage as Gus reveals that the statue originally belonged to Stoolbend until "borrowed" by Goochland. Leading a group to face off with the mob, a rolling blackout leaves the Goochland group in the dark while those from Stoolbend reveal themselves to have developed mole eyes in the dark. As Cleveland notes that the Goochland people are taken off to be eaten, Donna is freed when the police wagon is overturned. Chet pursues Cleveland to the river but is confused when he mistakes Jr. for Cleveland. Cleveland ignites the river, burning the bridge but Chet makes it to the other side and holds a knife at Jr.'s throat. As Chet laughs at Cleveland's apparently failed ploy to burn him, Cleveland notes he only set the river on fire to catch the attention of a giant monster which proceeds to devour Chet. Cleveland and Donna bump into each other later when Cleveland propositions Donna and Donna accepts as they laugh it off and proceed to their rendezvous.

Meanwhile, Rallo enjoys the fact that he still gets to participate in Halloween until he accidentally cuts himself badly with a knife. As he periodically calls for help and leaves a large puddle of blood, he appears as a ghost in the end noting he died but laughs it off reporting he'll be back the next episode.