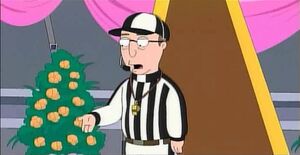 Edward G. Hochuli is an attorney for the firm of Jones, Skelton & Hochuli, P.L.C. since 1983 and better known as an American football official in the National Football League (NFL) since the 1990 NFL season. His uniform number is 85. Prior to his officiating career, he played college football for four seasons at the University of Texas at El Paso (UTEP).

Retrieved from "https://cleveland.fandom.com/wiki/Edward_Hochuli?oldid=16823"
Community content is available under CC-BY-SA unless otherwise noted.