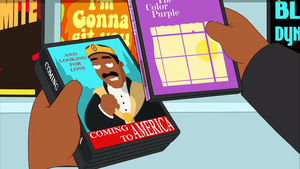 Edward Regan "Eddie" Murphy (born April 3, 1961) is an American stand-up comedian, actor, writer, singer, director, and musician. He was a regular cast member on Saturday Night Live from 1980 to 1984.

Eddie Murphy's work as a voice actor includes The PJs, the Shrek series and Disney's Mulan.

In "The Men in Me", the Tyler Perry DVD section replaced those of Eddie at Blackbuster. In the same episode, Cleveland picks up a DVD of Coming to America.