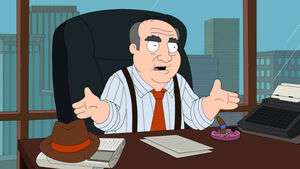 Edward Asner is an American film and television actor and former President of the Screen Actors Guild, primarily known for his role as Lou Grant on The Mary Tyler Moore Show and its spin-off series, Lou Grant. More recently, he provided the voice of Carl Fredricksen in Pixar's 2009 film, Up, a role that he briefly reprised in the episode "Murray Christmas".

Ed provides the voice of the editor of The Daily Splash in "The Curious Case of Jr. Working at the Stool". He has an additional voice credit in "How Cleveland Got His Groove Back" as the storyteller and "The Blue And The Gray And The Brown" as the narrator. He also narrated the prologue of "The Hurricane".

Retrieved from "https://cleveland.fandom.com/wiki/Ed_Asner?oldid=17659"
Community content is available under CC-BY-SA unless otherwise noted.