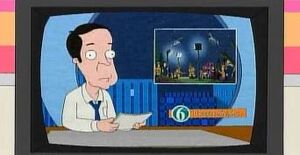 Dwayne Meighan is the local television newscaster of Stoolbend. He handles things from general news to sports stories, although his apparent slight mental handicap often makes him come off as a bit awkward. Cleveland and Kenny West see him presenting a news story about a little girl who fell in a well while sitting in a diner trying to decide how to promote their rap song in "Harder, Better, Faster, Browner". This gives them an idea to perform a benefit concert during her rescue.

Rallo has actually interacted with him in "It's the Great Pancake, Junior Brown", having called the Stoolbend Sports Chat to talk with him about baseball when he can't fall asleep.

In "The Hurricane", he gives the warning about Hurricane Flozell's approach.

In "California Dreamin'", Gina puts together an elaborate production of stand-ins including Dwayne to convince the Brown family that Cleveland has returned home from Los Angeles and they should do the same.

Dwayne is voiced by Mike Henry.

Retrieved from "https://cleveland.fandom.com/wiki/Dwayne_Meighan?oldid=31396"
Community content is available under CC-BY-SA unless otherwise noted.