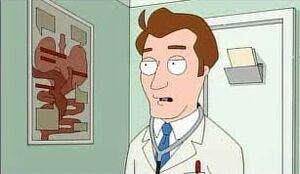 In "The Curious Case of Jr. Working at the Stool", Cleveland goes to see him when he loses his mustache. Dr. Fist tells him that he has Dipliatory Mustachio Alapecia, or DMA for short. It later is revealed that Dr. Fist is part of Cleveland Jr.'s plot to get revenge on his father for getting him fired from The Broken Stool.

Dr. Fist also informed Cleveland of a problem with his cholesterol levels in "Gone with the Wind" and put him on a high-fiber diet to help. He later gave him a "Fart Card" to give a reason for the excess flatulence that the diet caused.

In "Flush of Genius", he leads a team of hospital interns who tease Cleveland about falling off a toilet. He offers to promote one intern to doctor for making a funny comment, and tells another she is fired for not being funny - until he gets the joke and also offers to promote her.

Cleveland goes to see Dr. Fist at the hospital for a vasectomy reversal in "A Vas Deferens Between Men & Women" but backs out of the procedure. When Donna finds out and pretends to be pregnant, Cleveland overhears and they continue the charade right up through Dr. Fist's "delivery" at the hospital while waiting for the other to tell the truth.

During a visit to Dr. Fist at the Stoolbend Medical Center in "Fist and the Furious", Cleveland decides to make Dr. Fist part of his circle of friends, but later finds out that Dr. Fist has ties to the mob and that he has been living under an assumed identity. He reveals that his real name is Green-Jarvus Ben-Ellis.

Dr. Fist joins with the gang in being paid as mourners at a funeral in "Grave Danger". They start to enjoy the beauty of Stoolbend Cemetery enough to make it a relaxing hang out.

While smoking a cigar with the guys that he stole from his father 20 years previously in "Of Lice and Men", Dr. Fist complains that dads suck. They later confront their fathers after getting Cleveland in trouble with LeVar Brown. Dr. Fist's father gives him an expensive Rolex that a customer gave him to show his approval of the guys standing up to their fathers.

Dr. Fist was originally voiced by Seth MacFarlane, but Tom Kenny filled in for him due to Seth making his directorial debut with the live-action film Ted in "Skip Day". Beginning with "Flush of Genius", Fist is now voiced by Bryan Cranston.