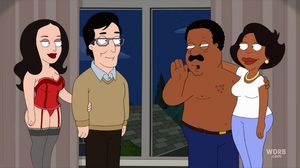 Dr. Nerse is the marriage counselor that Donna insists Cleveland see with her after Cleveland follows the guys advice for his vow renewal in "Here Comes the Bribe". After embarrassing her buy being unflattering, Donna drags Cleveland to marriage counseling but after the counselor appears to side with Donna, he makes it clear that Cleveland can swing the "treatments" in his favor for extra money. Cleveland quickly writes a check and the counselor asks Donna to bend to Cleveland's wishes for a while. Cleveland proceeds to abuse his position with Donna until the doctor demands Cleveland sleeps with his wife and threatens blackmail if Cleveland doesn't give in. Telling the guys, they advise him to give in. At the doctor's house, Mrs. Nerse is enthusiastic but Cleveland resists and admits he loves Donna only to find it was a set up to get him to really admit his love.

Retrieved from "https://cleveland.fandom.com/wiki/Dr._%26_Mrs._Nerse?oldid=25877"
Community content is available under CC-BY-SA unless otherwise noted.