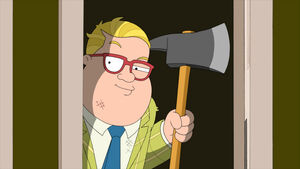 Donny is a would-be friend of Cleveland Brown and bad joke teller.

In "How Cleveland Got His Groove Back", Donny was among Cleveland's new group of friends after he leaves Lester, Tim and Holt when he is embarrassed by Lester striking him out.

In "Nightmare on Grace Street", Donny exhausted everyone with his bad jokes, but when Cleveland finally told him to get lost after he cost them candy while trick-or-treating at Wally Farquhare's house, he had a psychotic break and went on a rampage. He broke into Cleveland's house while Cleveland and Rallo were left in a spooky old house to exact revenge for being snubbed. When Donna got up for some snacks while watching Cleveland and Rallo via Webcam, Donny broke through the basement door with an ax. When Donna and Cleveland, Jr., told him that Cleveland wasn't there, he decided to start by killing Donna and Junior instead, chasing them both around the house in an attempt to hack them up. When Cleveland and Rallo returned home, they found Donny disguised as Donna, whom he had tied up along with Junior. Donny attacked Cleveland with his ax. While they struggled, Rallo sprayed fluid from Junior's WD-40 costume onto the floor, enabling Cleveland to force Donny out the window and plummet to his death, screaming about hating black people as his final words. Cleveland ended by noting that they were pretty brave, after all, having just killed a man to protect their family. Things came to a close with the reprise of a musical number as Gus hauls away Donny's body.

Donny would later be temporarily resurrected to play the role of one of the hostages shot by Tim and his group of thieves in "Die Semi-Hard". He was killed again for offering up a bad present, telling one more of his bad jokes as he went to his death.

Donny appears in the Italian and German segments of "Wide World of Cleveland Show".

Donny is voiced by Danny Smith.

Retrieved from "https://cleveland.fandom.com/wiki/Donny?oldid=32090"
Community content is available under CC-BY-SA unless otherwise noted.