Donna Lou Retten Tubbs-Brown is the wife of Cleveland Brown and works as the principal's assistant at Stoolbend High School. She has two biological children from her previous relationship with Robert Tubbs, Roberta and Rallo. As a result of her marriage to Cleveland, she has also gained a third child, Cleveland Brown Jr..

Donna and Cleveland were initially best friends in high school, although Cleveland clearly had romantic feelings towards her. Donna unfortunately was for the most part oblivious to his feelings, and instead dated Cleveland's unofficial rival Robert. In "Hot Cocoa Bang Bang", a flashback shows Donna was 'saved' by Robert after she fell in a fountain at the Stoolbend Galleria, Cleveland was going to save her but he was too concerned about his socks and shoes getting wet and failed to impress Donna. Despite Cleveland's attempts to get Donna to see Robert for what he truly was; a self-centered, irresponsible jerk, Donna ended up marrying Robert shortly after graduation. Seeing no reason to remain, Cleveland left Stoolbend and Donna behind.

Despite many attempts at making their marriage work, Donna and Robert ended up separating due to Robert's heavy drinking and drug abuse, not to mention repeatedly losing the Dancing with the Stools contest, leaving Donna to raise their children alone in 2002. Robert would visit occasionally, but more out of selfish desire such as collecting his alimony from Donna in "Back To Cool", rather than any familiar reasons. After years apart, Donna was of course over-joyed to see her best friend, Cleveland again. Cleveland and his son, who were passing through Stoolbend while driving to California, had stopped by the high school to retrace Cleveland's old stomping grounds. Donna offers that the Browns stay at her house, which resulted in a rekindling of their friendship that soon blossomed into a full-blown romance. The two married at the end of the "Pilot", and honeymooned in New York City a few months later in "Once Upon a Tyne in New York".

Having been friends for years prior to getting married, Cleveland and Donna have a close relationship both sexually and platonically. Donna comes off much more patient and understanding than Cleveland's first wife, and is more attentive to him as well. She does slap Cleveland occasionally, but it's only to toughen him up or to get him to stand up for himself. Her relationship with her children meanwhile is somewhat more shaky, as both her children are the result of a broken home and neglectful father. Donna does her best to keep her children under-control, but is aware that they need a father figure at times. Yet despite any issues that she and her kids have, its clear that they care for one another. Donna's relationship with Cleveland Jr. is unsteady for the fact that Cleveland Jr. is quick to do what he can to follow Donna's wishes for fear of another divorce occurring in "Birth of a Salesman" and later progresses to Junior becoming determined to take Donna away from Cleveland in "Dancing with the Stools". Nevertheless, she has shown herself as willing to protect him from danger, such as when she saved him from an ax-wielding Donny in "Nightmare on Grace Street" by throwing a wine glass at his head.

Donna works as an assistant to Principal Wally at Stoolbend High School. She takes care of odd jobs, assisting Principal Wally when he is indisposed and serving as a secretary of sorts as she can type 85 words per minute according to "Once Upon a Tyne in New York". She takes on as many duties as her job allows, showing teachers how to properly put out chemical fires and aiding other kids as shown in "The Brown Knight". Despite her job, she is also shown to have an issue with children, telling Rallo about the boogyman just for her amusement in "Brown Magic and that "Kids Suck at Everything" and blaming a fire that she started at Funky Junction on kids in "Pins, Spins and Fins!". She also takes away Junior's Larry the Leopard animal and nearly saws it in half when Junior is slow to provide cash after he and Rallo break her recorder in "Hustle 'N' Bros.". Rallo goes as far as to warn their new dog Rock Hudson to keep his head down, noting that their mama is crazy.

An often used source of comedy comes from Donna's stereotypical Southern expressions, often starting with "Sweet" and ending with two rhyming phrases, such as "Sweet candy and Jessica Tandy!" 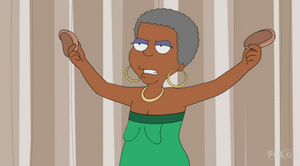 Donna wears a wig; her natural hair color is grey, and she does not often have time to color it. In "To Live and Die in VA", she received a style and dye from Cleveland Jr., commenting she now looks like Beyonce. She would also reveal herself to have her lips and eyebrows painted on with makeup and wear padding in her bra to give the impression of perky breasts in "Sex and the Biddy".